One of the common misunderstandings when you tell people that you are a Gnostic is that they hear the more familiar word “Agnostic.” (This becomes quite amusing when they mishear “Agnostic Priest,” or “Agnostic Eucharist.”) This becomes a good opportunity to elucidate one of the truisms of contemporary Gnosticism: You have to be an Agnostic before you can become a Gnostic.

The original differences between agnostic and gnostic are the “privative alpha” of Classical Greek. This prefix functioned like “un-” or “non-” and thus linguistically the two words are opposites, literally 'Knower' and 'Un-Knower.' (incidentally, the “a” was the first syllable, and the “g” was pronounced in both.)

However, this is Modern English and not Classical Greek, and so both terms have come to have certain more specific meanings. An Agnostic has been jokingly called a “cowardly Atheist,” but is generally someone who knows that they do not know about the divine from the reports of others.

As William James says, most people have faith in someone else's faith. They believe they know because they have beliefs that have been given to them. While this is entirely satisfactory in some aspects of life, for example if someone tells you what they know about Aruba from their readings, it is unlikely that you will have a need or desire to check their facts, you are satisfied with their account. However, It is highly unsatisfactory when it comes to the truly important aspects of life: the ultimate nature of oneself, the Cosmos, and the Divine.

In rejecting the answers of the Believers, the Agnostic withholds belief, and knows that he does not know. Someone who mistakes belief for knowledge, as most do in this world, will wrestle with the question of existence in the manner of belief: seeking stronger belief and assuaging doubts. It does not occur to Believers that they do not know, it only occurs to them that they do not believe. Thus an Agnostic has made a great deal of progress towards becoming a Gnostic, and has developed the attitude a Gnostic must have. For while a Gnostic knows from experience (has gnosis of), there is so much that a Gnostic does not know (has no gnosis of), and in these matters must maintain the attitude of an Agnostic. We can turn to scripture, tradition, and others for guidance in those aspects for which we personally have no Gnosis, but we cannot have Gnosis of someone else's Gnosis.

To know that one does not know is the starting point of the path of Gnosis.

WOW, that was a really beautiful and kool little writing!!!
Excelente!

Awesome post. I'm agnostic. I recently became that too and your post about 'gnosticism' is very appreciated.

Thank you so much for this explanation, I have had a hard time wrapping my mind around the difference between the two, clarity is a beautiful thing :)

Thank you, now iI do know that I was agnostic when I was younger, and through my own experience and study think I am becoming gnostic( big G or little g). Thank you again, for I have trid to fit into present religions. Episcopalian mainly, but they frustrate me beyond belief, so I leave. Also thanks for letting me know that I am not the only person trying to sort out my relationship with God.

Almost 11 years after posting date and it was a good little read for me. Thanks. 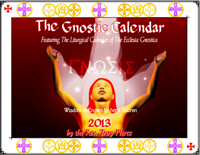 My apologies that no 2012 Gnostic Calendar was produced due to health and circumstances. 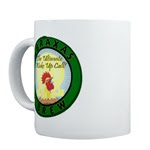 Fr. Troy Pierce
Salt Lake City, Utah, United States
Troy is an ordained Gnostic priest serving as rector in Salt Lake City, Utah. Instituted in 1953, the Ecclesia Gnostica is a publicly practicing, overtly Gnostic, Sacramental Church within the Apostolic Succession. Troy is the founding director of the Gnosis Institute, and, the producer of the GnosCast Gnostic Podcasts & the Gnostic Calendar, now in its sixth year. He is currently working within the limitations of a disabling illness to try to continue to serve.

GnosCast-Reflections: Reflections on the liturgical year and the Gnostic tradition by the Rev. Troy Pierce. RSS Feed
GnosCast-Homilies on iTunes

GnosCast: The Gnostic Podcast. Returned after a long hiatus due to illness, archive episodes are also available.
RSS Feed
GnosCast on iTunes 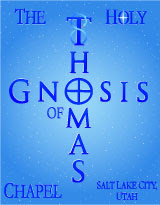 The Ecclesia Gnostica welcomes independent spiritual seekers to share in community the Gnostic tradition through liturgical services, formal and informal learning opportunities, and in conversation with trained clergy and others engaged in spiritual growth.
There is no membership or other requirements for participation.
Communion is open to all

Services are held most Sundays at 11:30 AM. The current schedule of events can be found here.

Steping Stones on the Path

That is the beginning of wisdom.
Pray we never see its end.